Home/ To see and do/ Leisure/ Theaters 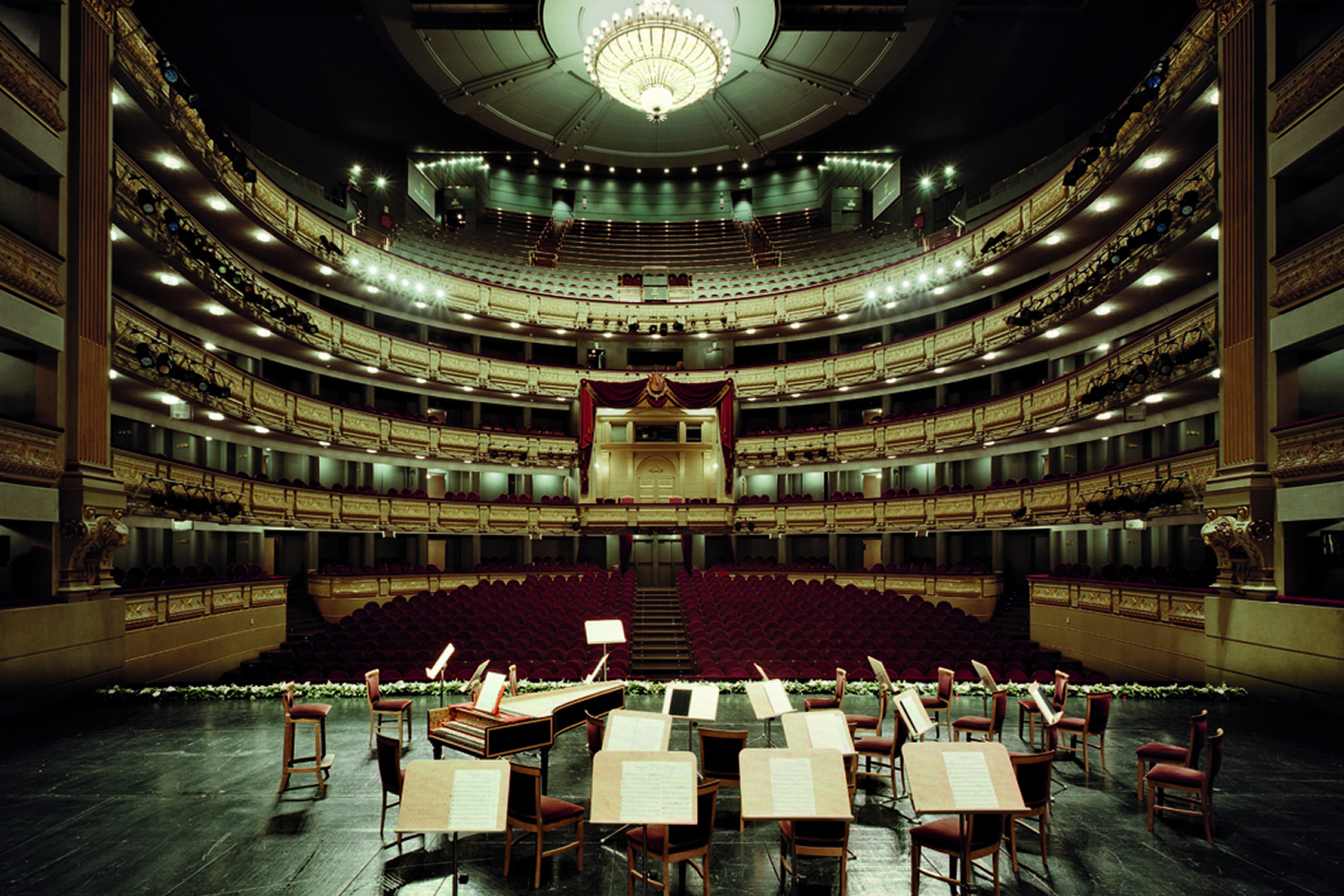 The region of Madrid has a wide programming of theatre, dance and circus for everybody. The most complete and wide billboard for enjoying the season. Discover our halls and theatres.

Check our cultural agenda and do not miss the show.

Below we show you some of the main classical theatres. There are many more, so check our agenda and do not miss them.

Royal Theatre. From the original building of 1708, and after many vicissitudes the last refurbishing was finished in 1995. This opera theatre is located in Plaza de Oriente and it is one of the most important theatres in Spain and Europe.

Fernán Gómez Theatre. Located in Colón, is a polyvalent space in its content and pioneer in its concept founded in order to develop the Performing Arts, the Dance, the Music and other cultural activities.

Häagen Dazs Theatre. On the Atocha Street, in front of the Jacinto Benavente square, it is located one of the most emblematic buildings of the cultural world of Madrid.

Theatre of La Abadía. In the old chapel of a boarding school it is located this centre, which currently is both used as a theatre and an academy. The theatre is located just in the middle of Chamberí, in the Fernandez Ríos Street.

Teatro Español. Until 1849 is the "Theatre of the Prince". It is the only one that still exists that is located in a former "corral de comedias". It is located in the Príncipe street.

La Zarzuela. It is the unique theatre of the Spanish lyric that soon will be 150 years old of its artistic life.

Rialto Theatre. In the Broadway of Madrid, in the 54 of Gran Vía Street, this reconverted and specialized in musicals theatre is located.

Fígaro Adolfo Marsillach Theatre. Designed by the Architect Felipe López Delgado, it was considered one of the most brilliant works of the Spanish orthodox racionalism. It is located in the Doctor Cortezo Street.

La Latina Theatre. Located in the neighbourhood with the same name, it is one of the most important stages for the representation of comedy and "review" of the Spanish history.

Cofidis Alcázar Theatre. This emblematic theatre of Madrid is located just in the middle of Alcalá Street. It was founded in 1925 with representations of the operetta of Madame Pompadour.

Infanta Isabel Theatre. It is located in Barquillo Street, just before the cinema Petit Palais. It is one of the oldest in Madrid, and here authors like Jacinto Benavente of Enrique Jardiel Poncela released in premiere.

Reina Victoria Theatre. It is a theatre room from the Victorian neoclassicism. It has a peculiar façade thanks to the stained glasses of Maumejean and the mosaics of Talavera. It is located just in the city centre, in the Carrera de San Jerónimo, close to Puerta del Sol.

Teatros del Canal. It is a "recent" Centre of Scenic Arts, since it was inaugurated in 2009. It is located in Chamberí, and it is owned by the Canal de Isabel II, where it gets its name.

Nuevo Teatro Alcalá. Originally it was named Coliseo Pardiñas and Alcalá-Palace. This theatre is located in Jorge Juan Street. Between 1991 and 2001 it was closed, rising the curtain in 2003.

Lope de Vega Theatre. It was inaugurated in 1946 with a musical review. Lately it was a cinema, although nowadays it is the most outstanding room of the Gran Vía of Madrid and it is one of the most active references regarding Spanish musicals.

Lara Theatre. From an architectural point of view this is one of the most beautiful theatres of the Region of Madrid. It is located in Malasaña, in the Corredera Baja de San Pablo. It was commonly known as "Bombonera de San Pablo".

Matadero Madrid. It is located in the 10 of Paseo de la Chopera. It is one of the most peculiar industrial buildings of the architecture of Madrid from the 20th century. It was refurbished into a centre for the contemporary creation.

Alternative theatres for enjoying the theatre in a different way

We cannot miss the alternative theatres, whose rooms spread all around the capital with great scenarios and ideas, almost exclusive and for few people.

La Casa de la Portera. It is an artistic transformation of a former house in the 24 of Abades Street.

Montacargas. It is a three-stages building: the first one hosts a bar with musical shows, coffee-theatre and picture exhibitions, etc; the second one is the theatre and the third one is a theatre school. It is located in the 19 of the Antillon Street.

Sala Triángulo. It is located in the 20 of Zurita Street, where we will find this theatre and alternative dance space, one of the most important in Spain.

What a better way of having a family day tan in the theatre. Madrid has theatres that have representations for children of all ages. This will allow you to have fun with your family. Enjoy it!

In both classical and alternative rooms, you will find what you are looking for like the Prosperidad Theatre, Sanpol Theatre, Cofidis Alcázar Theatre, Fígaro Adolfo Marsillach Theatre, La Escalera de Jacob, Tarambana, PlotPoint or the Karpas Theatre. These are just some examples, check the cultural agenda and choose your play.

Also in the Region

In Alcalá de Henares we find the Salon Cervantes Theatre (Cervantes Street). It is a theatre created in 1888 located just in the old town. It has a non-stop stage plays agenda.

In Aranjuez we find the Teatro Real Carlos III (San Antonio Street, 68). It is located in a building built by Carlos III in 1768. The theatre offers a wide programming, where you will find shows of all kinds.

In San Lorenzo de El Escorial we can find the Real Coliseo Carlos III (Floridablanca Street, 20). It is a building built by Carlos III with the purpose of conditioning the Yoyal Sites with places where to represent stage plays. The building has suffered from some refurbishing, being opened again in 2010 in order to host an annual programming of shows.

In Móstoles there are many places dedicated to the theatre. We highlight the Theatre of the Bosque (Glorieta de Europa) and Villa de Móstoles Theatre (In the 1 os the Plaza de la Cultura).

In Fuenlabrada, you can find theatres and cultural centres where you can enjoy from important stage plays in places like the Tomás y Valiente Cultural Centre (in the 51 of the Leganés Street), Josep Carreras Theatre (Oviedo Street), the Nuria Espert Municipal Room of Theatre (in the 17 of the Avenida Pablo Iglesias) or the Lucernario (in the 29 of the Honda Street).

The Federico García Lorca Auditorium Theatre (in the 22 of the Ramón y Cajal Street) in Getafe has a wide programming all the time.

And in Alcorcón we find the Buero Vallejo Municipal Theatre (Avda Pablo Iglesias), where you can enjoy from concerts, theatre and dance. A reference centre is the Jose María Rodero Municipal Theatre (in the number 3 of Londres Street) in Torrejón de Ardoz. It has a wide quality programming.

Finally in the northern area of the Region, we highlight the Adolfo Marsillach Auditorium (Avda de Baunatal 18) in San Sebastián de los Reyes.

Do not miss our festivals

Moreover, both in the capital and the surroundings there are many cultural activities like the Autumn to Spring Festival of Madrid, the Ancient Music Festival of Aranjuez, the Classical Theatre Festival of Alcalá de Henares or the Summer Festival of San Lorenzo de El Escorial.

If you need more info...

On the other side, the Region of Madrid has an initiative: the Theatres Network that guarantees a stable programming of the Scenic Arts and Music in the theatres and municipal auditoriums. The theatres network is already sorted by municipalities and by stage plays in billboard.