Home/ To see and do/ Active Tourism and Nature/ Birding 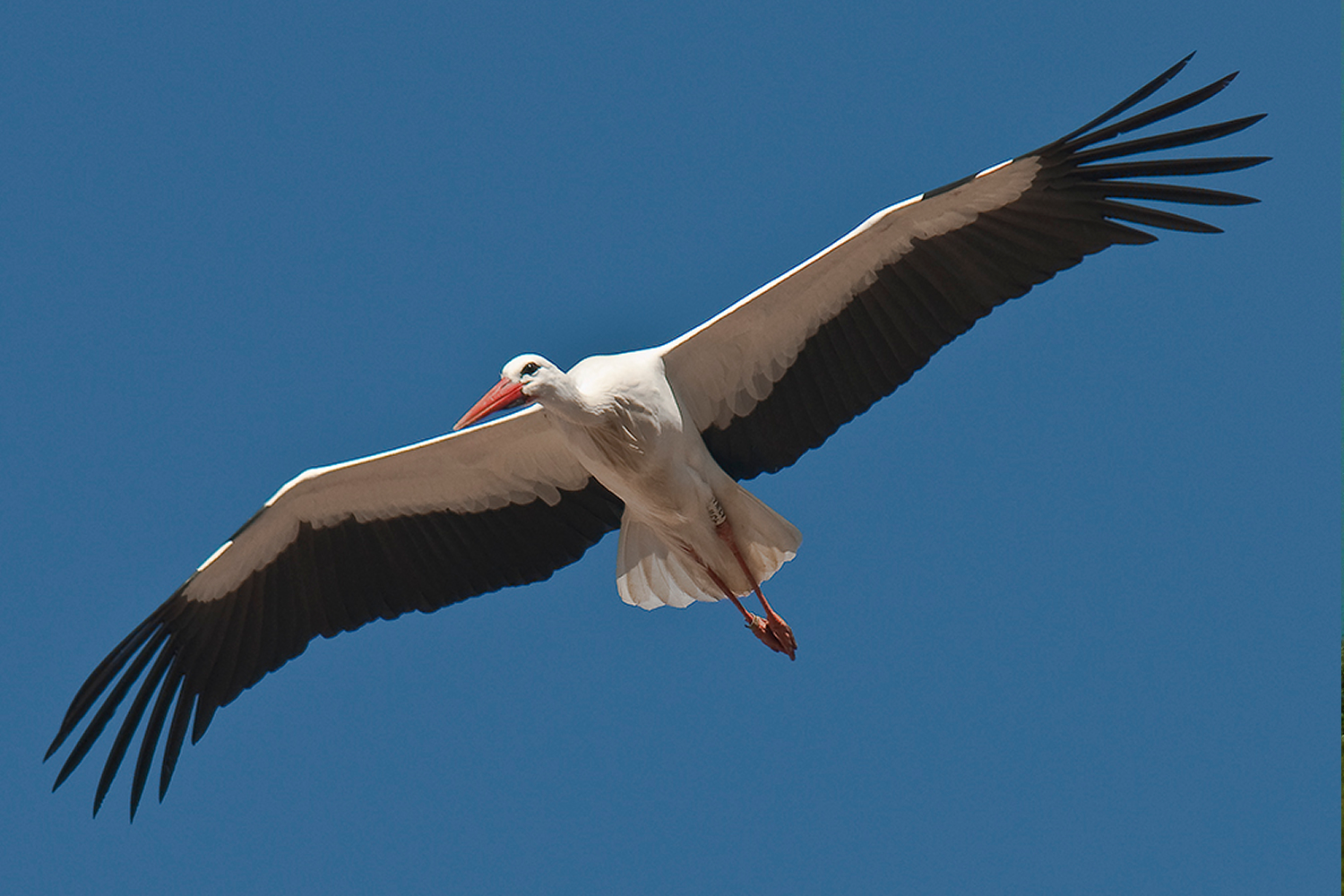 Forests, plains, steppes, mountains, lakes and even parks and gardens, are places where the enthusiast of nature can easily watch an interesting number of species. So take you binoculars, your camera and enjoy the ornithological richness of the Region of Madrid!

The Region of Madrid has ideal places to lose yourself in nature, close your eyes, listen to the birds singing and isolated from everything for a moment. A region of interesting contrasts of landscapes, biodiversity, and natural areas of high ecological interest, with ideal conditions for practicing outdoor activities.

With the 39.9% of its protected area, thanks to a diversity of ecosystems and habitats (high mountain, pine forests, meadows, pastures and riverside forests). The presence of about 240 birds species (of the approximately 400 in Spain) with key species such as the Imperial Eagle and the Black Vulture, and the recently declaration National Park of the Sierra de Guadarrama, give the region a huge potential as a quality birdwatching destination.

One of the most emblematic habitats of the Iberian Peninsula, holding unique species of European nature.
In Madrid this habitat can be observed and enjoyed by everyone who would like to visit any corner of the vast areas that this habitat covers in the region. Here we discover one of the best and well preserved breeding grounds for the Spanish Imperial Eagle. Despite being one of the most endangered species in the planet, nesting pairs are present just a few kilometers away from the city center.

In addition to the Spanish Imperial Eagle, Madrid offers very good chances for the birdwatcher to watch some of the most emblematic species in the Mediterranean woodlands: Black Stork, Booted Eagle, Black and Red Kites, Red-necked Nightjar, Eurasian Eagle-Owl, Eurasian Scops-Owl, Red-rumped Swallow, European Bee-eater, Iberian / Azure-winged Magpie and Sardinian Warbler among other species in a unique landscape.

Some places to enjoy the Mediterranean forest habitat in Madrid are the Sierra Oeste, Monte del Pardo and Soto de Viñuelas.

Mountain: Looking for the Bluethroat

With peaks over 2.000 meters (6.500 feet) above sea level, rocky summits, and slopes covered by extensive scot pine and Pyrenean oaks forests, the Sierra de Guadarrama and Sierra Norte are places of unique and rugged beauty.

In spring, after the snow has melted and above the growth limit of trees where mountain pastures appear, is where we discover the beautiful Bluethroat habitat and when we can observe the display and contests of Bluethroat males fighting for a place to breed from the top of the golden-flowered broom bushes.

These mountain areas are the home of a great number of unique bird species, such as Common Rock-Thrush, Water Pipit or Citril Finch, some of which choose the highest locations covered with grass and crags, while others like European Crested Tit and Western Bonelli's Warbler opt for forested parts. Raptors are also well represented here, with highlights including Cinereous Vulture, Griffon Vulture, Golden Eagle, Booted Eagle and Red Kite, among others.

If you want to experience a day of birding in the heart of the high mountains, don't hesitate to go to the Sierra de Guadarrama, the Sierra Norte or High Course of Manzanares River.

Steppes: Winged giants of the plain

The steppes and cereal fields are one of the most characteristic Spanish ecosystems. This is why this country holds the best populations of steppe land birds in western Europe.

Cereal fields and bushy steppe occupies vast areas in the East and South of the Madrid Region. On these wide cultivated plains where big flocks of Great Bustards find the place to bring up their young. One of the best times to visit is when the courtship takes place during the spring. Tens of males perform a spectacular courtship display, one of the greatest ornithological spectacles that should be seen at least once in a lifetime.

Those same fields where the Great Bustards thrive are home to other species equally adapted to this tough environment. Birds like Montagu´s Harrier, Lesser Kestrel, Little Bustard, Black-bellied and Pin-tailed Sandgrouse, Calandra, Crested, Thekla and Greater Short-toed Larks populate open areas of the region. Some of the areas covered with low shrubs or small crags are good places to look for the Dartford Warbler or even the curious Black Wheatear.

Jarama and Henares rivers plains, the Middle Course of the Guadarrama River or the Alcarria Madrileña are the main steppe zones of the Region of Madrid.

Wetlands and Riverbanks: A blue spot in the riverbank

Natural lakes in Madrid are very scarce but the recovery of gravel pits has resulted into a large number of 'artificial lakes' all over the Region of Madrid territory that has been rapidly occupied by an important number of waterfowl.

Thanks to their continuous water contribution, rivers are considered biodiversity shelters through territories under severe summer drought.

It is among the dense marsh vegetation of lakes and gravel pits where a singular bird appears, the Purple Swamphen; its spectacular metallic bluish body contrasts with its blood-red beak and robust legs.

In the trees and bushes that surrounds rivers and lakes is quite frequent to find the Eurasian Penduline Tit among a rich group of species that prosper on this kind of habitat. Lakes and marshes are home as well to the Little Bittern, Western Marsh Harrier, Great Crested Grebe, Black-necked Grebe and Great Reed Warbler. Among waterfowl it is quite frequent to find Northern Shoveler, Mallard, Red-crested Pochard, Tufted Duck and the Ferruginous Duck is an occasional visitor to these environments on some of the wetlands in the region.

The main wetlands of the Region of Madrid are in the Southeast, such as the Mar de Ontígola quite close to the city of Aranjuez, Laguna de San Juan near Chinchón and the gravel pits between the rivers Jarama, Manzanares and Henares.

The cities in the Region of Madrid count with beautiful and on occasions big urban parks, with some of them historic landmarks as well, such as the ones we can find in Madrid, Aranjuez and El Escorial.

These parks, in addition to being great places for recreation and leisure for the local population and tourists, are a place where wild birds find a place to breed, winter or thrive inside the city. Some of the typical species we find here are Short-toed Treecreeper, a wide variety of tit species (Great, Blue, Coal, European Crested) amongst others.

It is not strange to find some smaller raptors such as Northern Goshawk, Eurasian Sparrowhawk, Common Kestrel and some nocturnal species such as Little Owl and Eurasian Scops Owl. These birds of prey take advantage of the big communities and diversity of birds that inhabit this urban ecosystem. Additionally, if the park counts with small ponds or lakes, these areas are frequently used by waterfowl, that seize the chance of abundant food. Surprisingly, we could find more than 40 species in just an early morning walk in these oases of nature in the middle of the cities.

If you are a beginner in ornithology, you have many green areas, even without leaving the city, like Casa de Campo, Dehesa de la Villa, Retiro or the green areas of the municipalities of the Region of Madrid. Watching birds is a healthy, ease and satisfactory hobby. It requires a little bit of patience sometimes, but is always worth it.

If you have the bird watching bug, visit one of the 28 Ornithological Routes designed over the Network of Cattle Trails, which run through different ecosystems, from the mountain until the steppes, going through pine forests, the Mediterranean mountain and the deciduous forests, without forgetting wetlands, copses and crags around the Special Protection Areas for Birds (ZEPAs) with the scientific supervision of SEO-BIRDLIFE .

To enjoy it in the most complete way, you must download the application Ornivias for Smart phones (iPhone y Android), which has auto-guided tours with Augmented Reality technology that virtually points these 28 ornithological tours in the Region of Madrid. In the application you will find a Geocatching game where you will be reaching targets. It also has a field integrated notebook. This application received the FITUR award in 2013 as the best active tourism product.

The Region of Madrid has many protected areas, some of them especially dedicated to the protection of birds. It is the ZEPA (Zonas de Especial Protección de Aves) and there are 6 areas where you can enjoy the ornithology, in special protected places.

The ZEPA Alto Lozoya is integrated in the Natural Park of Peñalara. It has the biggest population of the black vulture of the Region of Madrid. The environment has a great area with coniferous trees where you can watch the many predators.

The ZEPA Soto de Viñuelas is integrated in the Regional Park of Manzanares, between Tres Cantos y San Sebastián de los Reyes. It is composed by a Mediterranean forest. Among the visible species we highlight the Spanish imperial eagle, the booted eagle, the black kite and the red kite.

The ZEPA Monte de El Pardo is a former royal hunting ground in the north of Madrid. It has a Mediterranean climate. Among the visible species the Spanish imperial eagle, the black vulture and the royal owl stand out.

The ZEPA Encinares de los Ríos Alberche y Cofio is located in the southwestern area of the Region of Madrid. It is characterized by the pasturelands with Holm oaks and busts. Among the visible species the Spanish imperial eagle, the griffon vulture, the black vulture, the partridge eagle, the black stork and the royal owl stand out, as well as rodents like Cabrera vole.

The ZEPA Carrizales y Sotos de Aranjuez is an integrated area in the Natural Reserve of El Regajal-Mar de Ontígola, in Aranjuez and Colmenar de Oreja. The area characterizes by the pasturelands, salt marshes and wetlands associated to the middle Tajo. The aquatic population of birds stands out, like marsh harriers, the little bittern, common reed pen and common stilt, favored by the islands and black waters emergence in the rivers. This area also stands out due to one of the best butterflies' population of Spain.

The ZEPA Estepas cerealistas de los ríos Jarama y Henares is located in the area that runs through the Northerns Range until the Tajo River. It is a special protected areas for salt lakes and Mediterranean species. The bustard, little bustard, the lesser kestrel and grey and hen harrier stand out.

The ZEPA Cortados y cantiles de los ríos Manzanares y Jarama is an integrated area in the Southwestern Regional Park, in a Mediterranean climate area. It is characterized by endemic areas with a great ecological value. The populations of pilgrim Hawn, black vulture (unique for breeding in cliffs), lesser kestrel, bustard and royal owl stand out.

The Region of Madrid has published a series of guides to aid known and encourage nature tourism, adventure tourism and especially ornithological tourism in a sustainable way with the environment. Discover all the possibilities offered below.

With the aim of encouraging visits and contribu...

Although the Feria del Libro (Book Fair) has fi...

We are back for another week with 5 virtual pla...

From 14th October to 1st November, the Teatro C...