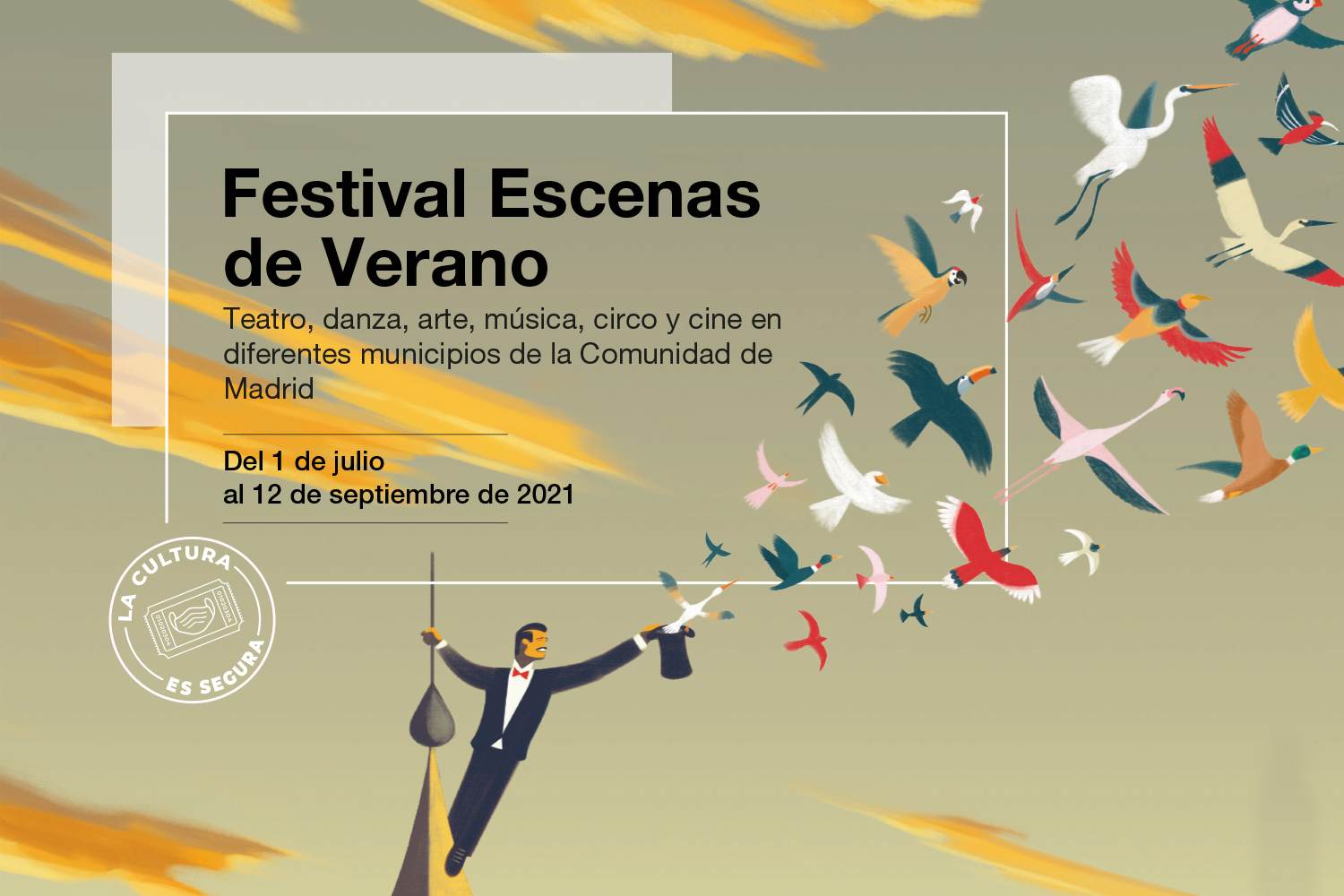 Get ready this summer because the "Summer Scenes" festival fills the region with culture, entertainment, excitement and fun. No matter where you live, you're sure to find the perfect event for you just a few steps away.

Enjoy the best cinema, puppets and theater, circus, dramatized visits, dance and regional dances, shows or music on the same day. Until September 12, hundreds of free events and activities open to all audiences, for all tastes. Summer is yours!

The museums and exhibition halls will be filled with originality and interactivity to make your visit unforgettable. Enter for free in the summer workshops ''Eu-genios. Imaginary adventures!'' of the Picasso Museum in Buitrago del Lozoya on Saturdays July 24 and 31 and August 7 and 14. In these, the kids will learn who Picasso was and his creative process to then create their own works.

Dramatized visits and routes. In Nuevo Baztán, daytime dramatized visits ''Between factories and palaces: a walk through Nuevo Baztán'', every Sunday in July. And in Alcalá de Henares, the dramatized route ''Women of Alcalá'', the women who surrounded Cervantes throughout his life, on Saturdays, August 21 and 28, as well as on September 4, 11 and 18. In addition to the exhibition "Cervantes in the European theater of the twentieth and twenty-first centuries" at the Cervantes Birthplace Museum in the city.

Art will also be present in the squares of the eleven towns of the Community of Madrid with exhibitions and performances in Manzanares El Real, Patones, San Martín de Valdeiglesias, Chinchón, Buitrago del Lozoya, Navalcarnero, Nuevo Baztán, Rascafría, Villarejo de Salvanés, Colmenar de Oreja and Torrelaguna, until September 18. With artists such as Miss Beige, Marta Pinilla or Rev Silver.

The performing arts and folklore from Madrid will have a leading role in the different spaces of the municipalities of Madrid, such as the Plaza de Felipe IV in Brea de Tajo, the gardens of the municipal music school in Collado Mediano, the Plaza de Sevilla in Sevilla La Nueva, the Plaza Mayor in Cervera de Buitrago and Gascones, the park in El Boalo, the Plaza de la Villa in Daganzo or the sports centers in Tielmes and Valdemanco.

In the region's cultural centers you can enjoy the best summer movie nights. An example of this is the Centro Cultural Paco Rabal, the Centro Comarcal de Humanidades Sierra Norte or the courtyard of El Águila, which is projecting a film series in tribute to the actor Fernando Fernán Gómez on the centenary of his birth.

One of the films to be shown this summer is El arte de volver, directed by Pedro Collantes. The film tells the story of Noemí, an actress who returns home after six years of training in New York to attend an audition. Her return and her encounters with people from her life help her to think about her future.

Music and concerts will flood terraces and covered areas. One example is the concert by Mr. Kilombo, who on Friday, July 9 at 8 p.m. at the Casa de America will try to make a tribute to reggae and ska mixed with Latin American music.

For fans of classical music, at the Centro Cultural La Torre, in Guadarrama, you will find instrumental concerts that will delight your ears. Miguel Bonal, with viola da gamba and classics from Hume to Bach on July 10 at 8 p.m., or the Camerata Antonio Soler with compositions by Vivaldi on Friday, August 6 at the same time.

The "Cine de Verano" screenings, the 16th edition of the already consolidated "Galapajazz" festival in Galapagar, "Clásicos en Verano", the "Festival de Verano" in San Lorenzo de El Escorial and "Teatralia Circus" are five of the most awaited events of Madrid's summer that can be enjoyed again.

"Teatralia Circus" is being held at the Teatros del Canal. Eight performances that include magic, acrobatics, juggling, balancing acts and clowns, a figure that always gets smiles from young and old alike. While classical music has begun to sound in churches, porches, monasteries and other spaces of 46 municipalities in the region of Madrid.