Home/ Featured/ Route through the Main Squares of Madrid 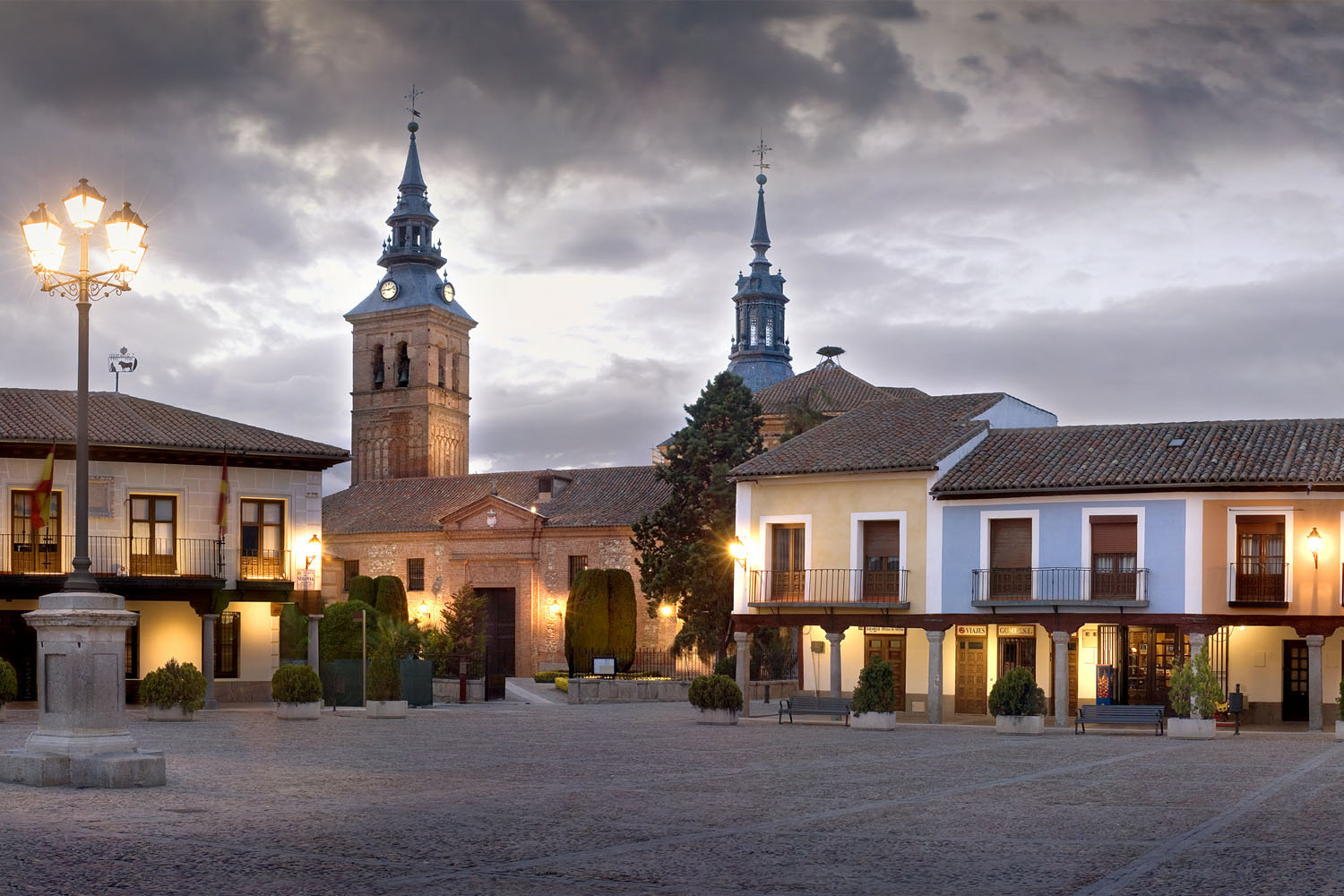 We invite you to get to know the region through its main squares. A route through medieval squares, Castilian or porticoed squares, some of which are considered among the most beautiful in the world. If you were thinking about what to do during the next days, come with us to discover the region, its people, its monuments and its most special corners. Let's start!

We start with Alcalá de Henares, a town declared a World Heritage Site by UNESCO. There you will find the Plaza de Cervantes (Cervantes Square), formerly known as the Market Square, as this is where the market used to be held every week and where important celebrations such as the annual fair took place. Nowadays, a meeting point for citizens and visitors, it is surrounded by trees, and has important buildings, such as the Town Hall, the Corral de Comedias, the statue dedicated to Cervantes, or the tower of the old church of Santa María la Mayor.

Brunete, also has a Main Square worth visiting. The most important events in the town take place there, such as processions, parades and local festivities. Its beautiful construction is not completely closed, leaving space for the steps leading up to the square and the church of Nuestra Señora de la Asunción, another place not to be missed.

Without a doubt, one of the most special and well-known squares is located in Chinchón, which is catalogued as one of the most beautiful squares in the world and declared the 4th wonder of the Region of Madrid. An improvised film production set, it is a square of popular Castilian architecture with arcades and three-storey balcony floors.

And from one Villa to another, in this case Colmenar de Oreja, whose square is one of the best preserved and whose architecture is a magnificent example of Castilian construction. There we find two important buildings, on the one hand the Town Hall, and on the other the granary.

In Navalcarnero we find another example of a square, which has become the heart of the town, and which has been declared an Asset of Cultural Interest. The Golden Age Market is still celebrated there. The Plaza de Segovia (Segovia Square), is a beautiful example of a square with arcades, which over the centuries has witnessed important celebrations, festivities and other events.

The Main Square of Torrelaguna is another beautiful example of Castilian architecture. We can highlight the presence of the Town Hall, an old granary where grain was stored in times of shortage; the church of 'Santa María Magdalena', with its Gothic architecture; the convent of the 'Hermanas Concepcionistas Franciscanas Descalzas'; and the 'Cruz de Cisneros', which stands on the site of the house where the Cardinal was born.

Located in the Comarca Sur, we find the town of  Valdemoro. We go there now to walk around its square, known as 'Plaza de la Constitución', which like the previous ones, is a porticoed square of Castilian architecture, located as it could not be otherwise, in the historic centre.

We are now going to Villaviciosa de Odón, a town located along the Guadarrama River and that is well worth a visit. But this time we focus on our particular route of squares, to reach the Main Square, which is located in the heart of this beautiful town, and houses the Town Hall since 1852.

And from here, we go to the capital to make our last stop, although no less important, and visit the Plaza Mayor (Main Square) in Madrid. A space located in the heart of Madrid de los Austrias, close to the famous Puerta del Sol and a meeting point for Madrid residents and tourists.

Will you join us to get to know our region better?