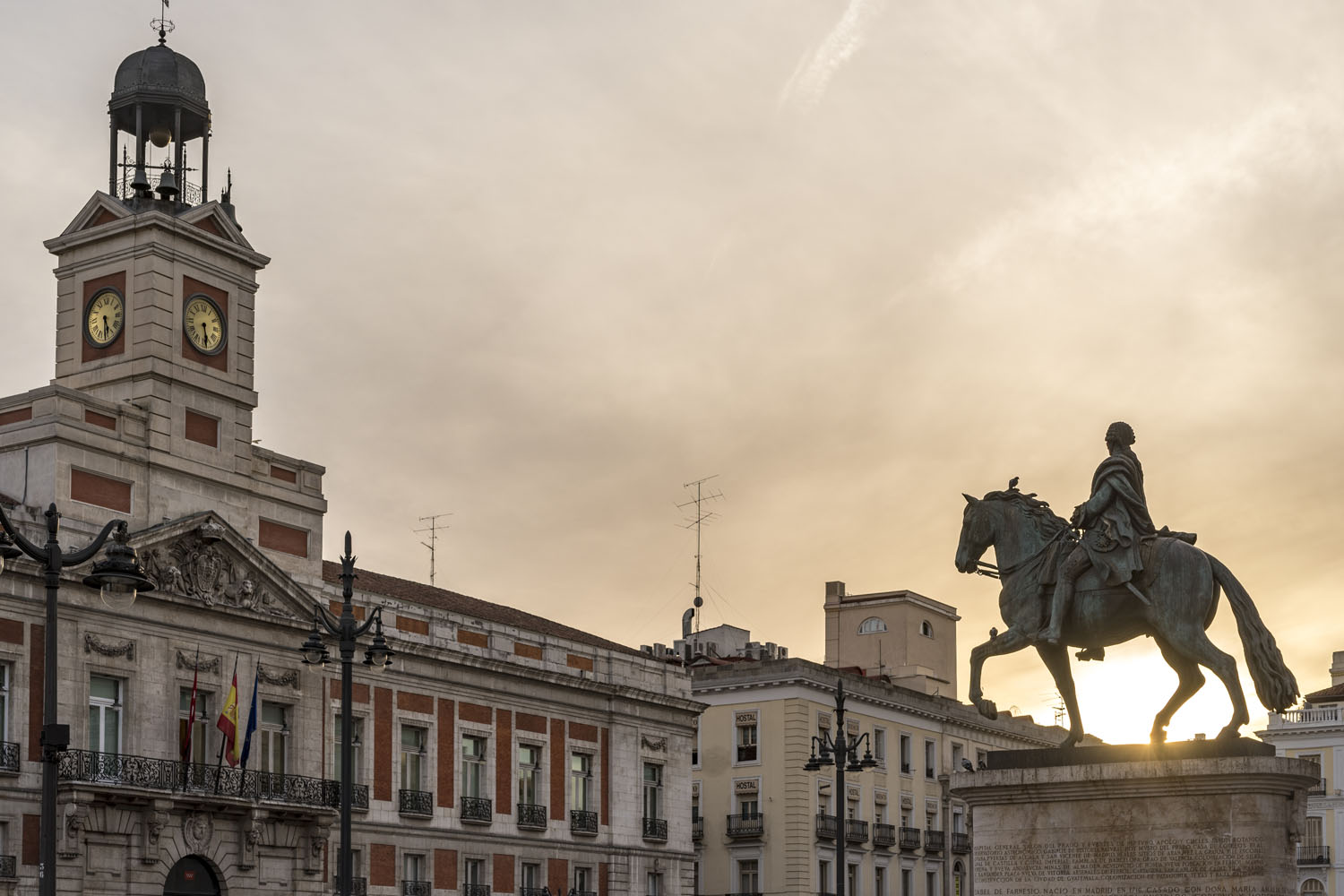 The nerve centre of the city. Its main attraction is the clock that chimes to mark the beginning of the year. Don't miss the chance to take a photo with the statue of "The Bear and the Strawberry Tree" and find Kilometre Zero.

Originally, the Puerta del Sol was one of the entrances to the wall that surrounded Madrid in the 15th century and the name comes from a bas-relief sun that was carved into it. It was an outer point of the city, although due to its location and the growth of Madrid towards the east, it gradually became a key place for the exit to the surrounding area. Today it is the nerve centre of the city, and also the centre of Spain, as it is here - on the ground, in front of the clock of the Casa de Correos - Kilómetro 0, from which the six national highways depart.

The most important building in the square is the Casa de Correos, built in 1768 and which currently houses the headquarters of the Presidency of the region of Madrid. Protocol acts of the region of Madrid are held in this building. Look for the plaques on its façade that pay homage to the fallen in the uprising of 2 May 1808 against Napoleon's troops and to those who helped the victims of the 11M attacks.

The Puerta del Sol has undergone a series of reforms throughout its history, the last important one in the 1990s when the square was rearranged and an equestrian sculpture of Carlos III - Madrid's greatest mayor - by the sculptors Eduardo Zancada and Miguel Ángel Rodríguez was placed in its centre. Today it stands at the beginning of Calle del Arenal.

In this square there are also two other emblematic figures: those of the Mariblanca and "the Bear and the Strawberry Tree". The former is a replica of the 17th century original, now kept in the Casa de la Villa, which used to form part of one of the fountains in this square.

As for the "Bear and the Strawberry Tree", it needs little introduction as it is one of the symbols of Madrid and forms part of its coat of arms. The statue, the work of the sculptor Navarro Santafé, has been a privileged witness of Madrid's daily life since 1967. It is a regular meeting point, so it is often surrounded by people waiting for people. Recently, the statue has been relocated to the junction with Calle Alcalá. Be sure to take a photo here to keep a good souvenir.

We also suggest you look for the last remaining advertising poster from among the many that once populated the rooftops of the buildings in the square. In its day, the Tio Pepe poster was pardoned due to the affection it received from the people of Madrid. It has recently been restored and moved to the roof of another building in the square.