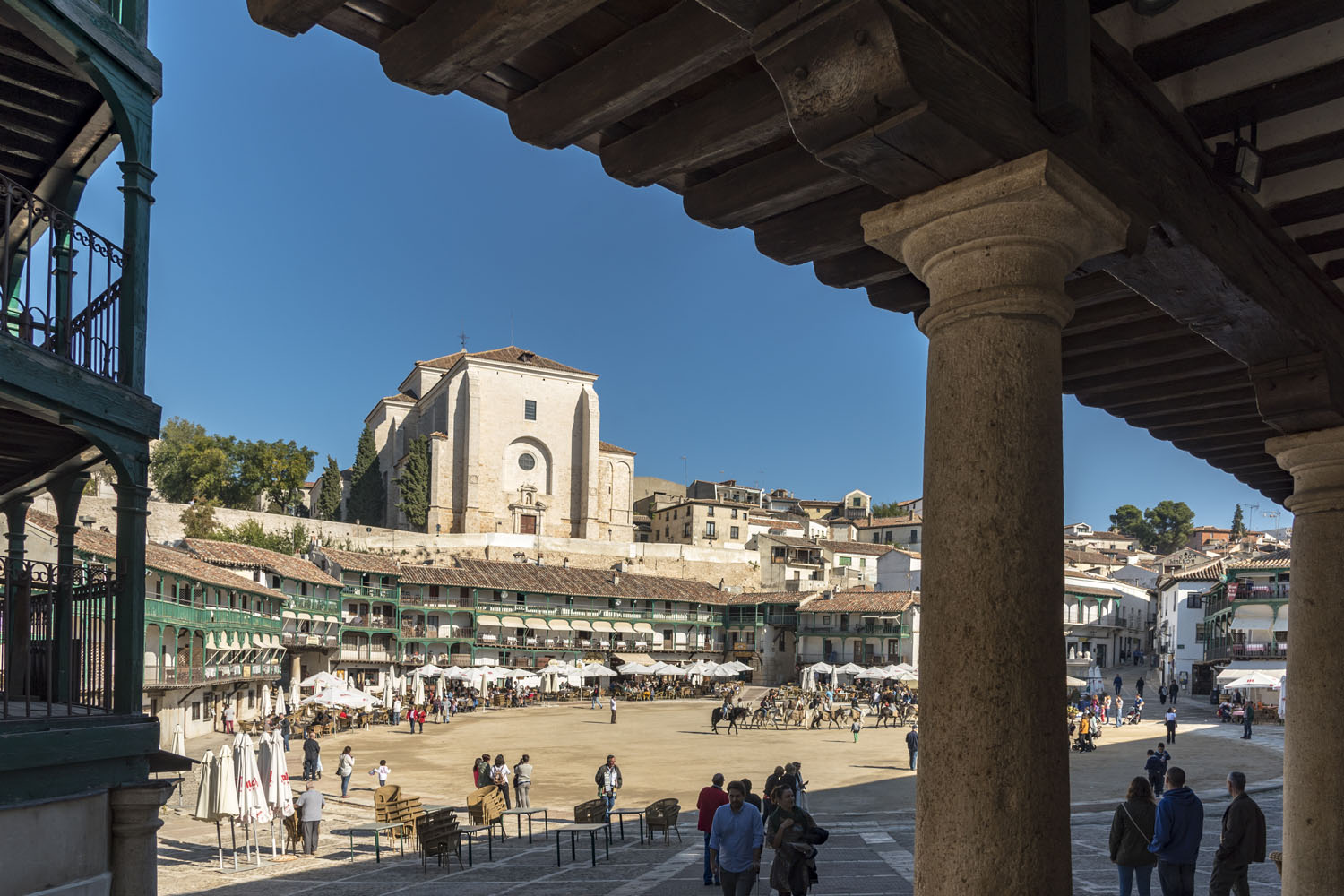 In its vicinity, there is the convent, Convento de las Clarisas, the panteón de los quintos Condes (Pantheon of the fifth counts), made entirely out of marble, preserved in the choir of the Church. Buy some sweets in the convent and share them with your loved ones, they will thank you for it. Continue to the Parador de Turismo, the Augustinian convent founded in the 17th century and with a very important role in the history of the city. Discover it! Then, you can visit the Castillo de los Condes (castle) although unfortunately its interior is not open to the public.

If you want, start by the tourism interpretation center (centro de Interpretación turistica), you'll be submerged in the history, the culture and the traditions of Chinchon. Ideal for visitors with the wish of getting to know in depth the curiosities and peculiarities of the history of the city. We recommend that you take it easy, Chinchon has a lot to say to those who know how to listen.

We now move into the Plaza Mayor (main square), which is the heart of the village since medieval times, and a good example of Spanish popular architecture where time seems to have stopped.

During the holidays, the square is used for bullfights, to which a curious fact manifests: some of the owners of the houses in the square have no ownership of the balconies, so there may be an agreement to access them during the celebration of the shows.

This singular square has been used numerous times as a film course, so don't worry if you feel like you've already been here!

To its back, there stands the Iglesia parroquial de la Asunción (church) that keeps inside it, a splendid canvas by Goya. The main altarpiece is worth some of your time to stop by it. You can also meet the clock tower (la torre del reloj), the only remnant of the Church of Nuestra Señora de Gracia (Our Lady of Grace). Its existence has given rise to a popular saying, that says that Chinchon «tiene una iglesia sin torre y una torre sin iglesia» meaning that "it has a church without a tower and a tower without a church".

We continue the visit with the San Antón Hermitage (Ermita de San Antón) that preserves the primitive Romanesque apse of the 11th century, where Gothic paintings have recently been discovered; with the Ermita de San Roque (hermitage), patron of the city whose construction dates from the second half of the seventeenth century; and finally, with the Chapel of the Rosary (ermita del Rosario), it appends to the current Parador de Turismo which historically belonged to the convent of San Agustín.

Down the street from the convent we have a very characteristic Baroque styled home, called Casa de la Cadena, since Felipe V spent the night in it in 1706 on its way through the town. Such an honor was recognized by placing a chain before the house, and since then, it holds this name (La casa de la Cadena: the house of the Chain).

If you don't want to miss anything, don't forget to visit the Parador de Turismo. Founded by the counts of Chinchon in the 17th century, it became as time went by, during the 18th and 19th centuries, a University on a small scale until the confiscation of Mendizabal when it became the judicial district court. This is an example of the living history of Chinchon.

Don't worry, you still have much to see. Chinchon is one of the "villas" with the most cultural activity in which the theatre, Teatro Lope de Vega plays a fundamental role. Don't miss their facilities or representations which take place in their stages, you will stay petrified.

If you want to know more about the customs of Chinchon, access to La Posada Ethnological Museum, which, as its name indicates, is installed in a 19th century coaching inn. Submerge yourself in the most traditional side of Chinchon.

In summer there are theater mode night visits organized while it represents the history of the city. And how could it not be, its impressive medieval market. Quite a sight.